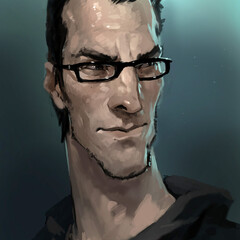 Shane Acker is an Academy Award nominated director, animator and designer. “9” was his feature directorial debut produced by Tim Burton and Timor Bekmambetov and was released by Focus Features in 2009. His short film short “9” premiered at Sundance in 2005 and garnered numerous awards including a Student Academy Award, the “Best in Show” at the 2005 SIGGRAPH Electronic Theater and a student Emmy®.
Shane has a multidisciplinary background in the arts and worked as an architectural designer and animator before becoming a director. He is a graduate of UCLA where he received both a Master of Architecture degree and a Master of Fine Art in Animation. With over 20 years of experience in the entertainment industry, Shane has worked with top animation companies including WETA, Universal Studios, Disney, DreamworksTV, Reel FX, and The Third Floor in a multitude of production roles including directing, previs supervising, animating, concept development, story boarding, and writing. Shane became an Assistant Professor in the LMU Animation department in 2016 and continues to hone his directing skills by writing, producing, and animating his own films.